We’ve always been a bit in awe of internationally acclaimed chef, Luke Dale Roberts. He is, after all, on The World’s Best Restaurant list year after year! Imagine our delight when he agreed to host Big Green Egg’s South African launch in 2012 at his eatery, The Pot Luck Club. Our guests dined on flash grilled scallops and tongues, roasted lamb ribs as well as a dry cured 24-hour pork rib, followed by a moreish dessert of slow baked Oak smoked apples, all prepared on the EGG. Needless to say, the event received rave reviews by all who had attended.

Later in 2012, we partnered again with Luke’s team at the Spier Secret Festival where they grilled some spectacular beef tataki on the EGG at the Chef Braai Off. Again, our guests were impressed by what can be cooked on the EGG by these talented guys who thoroughly enjoyed cranking up the temperature on the EGG to 400◦C!

Earlier this year, Luke contacted Andy Fenner of Frankie Fenner Meat Merchants about putting together a quirky pop up restaurant in Church Street. No reservations, 30kg of meat and 3 dishes cooked on the EGG delivered on his dream of some “Bohemian Madness”!

Of course, we were more than happy to oblige when Luke asked us for some Big Green Eggs to cook on at the recent Fair of Heart at Constantia Waldorff. We knew we were in for a gastronomic feast when we saw his menu: Pulled pork Miso roll with Kimchi and Moroccan lamb rib with Harissa and Cumin roti! It was generally agreed that queuing for these mouthwatering meals were well worth it.

A good day out for a worthy cause and we were happy to have played a small part. 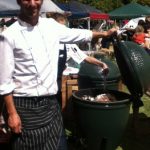 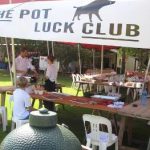 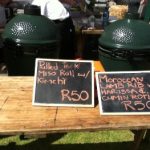