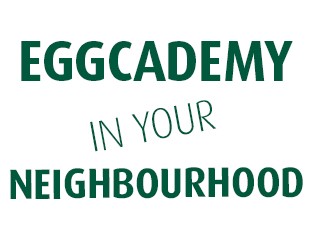 We knew we were onto something special when our last EGGcademy cooking class sold out within 48 hours! It was clear that our fans wanted to learn more about Nose to Tail cooking – how to make the most of their meat cuts and reduce food wastage.

The concept of Nose to Tail cooking is not new. Our grandparents and theirs used to prepare meals using what we would today describe as “un-sexy” cuts of meat, including tender organ meats like heart, kidneys and livers. A renewed interest in this sort of cooking came around 1999 when British chef, Fergus Henderson, penned “Nose to Tail Eating: A Kind of British Cooking in England”. It fast became a bestseller and the food trend known as Nose to Tail kicked off.

Food waste is a big problem. According to a study by UNEP and the World Resources Institute, about one third of of all food produced worldwide, worth around US$1 trillion, gets lost or wasted in food production and consumption systems.

We pride ourselves on our “green” credentials and when we were researching themes for EGGcademy, the South African economy just so happened to take a bit of a blow. Every South African, from upper to lower class, have had to tighten their belts. What better way to do our bit for the environment by embracing Nose to Tail eating whilst spending wisely, too!

Champion of the Slow Food movement in South Africa, Caroline McCann of Braeside Butchery in Parkhurst, Johannesburg, provided spectacular quality short rib, tongue and Picanha steak. NoMu’s roast rub enhanced their flavours beautifully, while their sweet rub gave a decadent twist to the pudding. All of this was perfectly accompanied by The Wolftrap wine.

The small class thoroughly enjoyed getting hands-on cooking experience. Participants learnt how to light and control the temperature of their Big Green whilst having to cook all the items on the menu. After much cooking, all our guests enjoyed eating what they had cooked in the Big Green Egg. The goodie bags they got to take home was a delightful end to the evening. 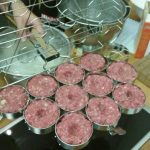 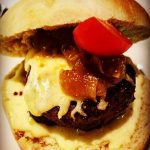 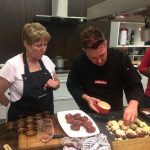 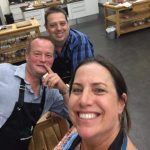